Ash enlisted into the U.S. Navy on the promise of endless waves of big, beefy dudes as far as the eye can see. She draws comics to cope with the disappointing reality of the situation until she discovers where Godzilla is sleeping in the depths of the ocean.

Why doesn’t the comic update as often?

I am currently deployed on a warship out in the middle of the ocean, fighting an unending battle with Poseidon, and most often times losing. Also, the internet is pretty terrible on the ocean, so new pages will have to wait until I get to shore.

What do you use to draw your comics?

Manga Studio EX and a Wacom Cintiq Companion. I am a huge fan of Frenden’s brushes.

Do you have advice for developing artists?

Where did you get the inspiration for Kilo Monster?

My love of beastly reptiles? I was influenced by movies like Jurassic Park, Dragonheart, and Godzilla as kid. I sympathized a lot with the creatures, and the beta versions of Kilo Monster were a reflection of that. Toss in a bit of love for professional wrestling, a dash of superheroes like the Hulk and Venom, and a hint of Beauty and the Beast tales, and you something kinda resembling Kilo Monster in the end.

Oh wait! Add a hat and suspenders too for good measure.

Do you do commissions?

Not at present. I have a full-time job that gives me food, housing, and a decent paycheck, so I don’t have a need to do them right now. And since I am dedicating my drawing energy toward the comic, I wouldn’t want commissions to pull me away from completing that. Sorry!

What do donations go toward?

Web hosting, domain fees, livestreaming channel, and properly compensating other artists to help with the comic.

Are Kilo and Todd a thing?

Kilo and Todd are many things. 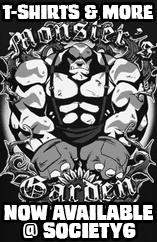